When you find No Highway more...

Nevil Shute's 1948 novel No Highway starts with three stanzas from John Masefield, who died this day 1967. 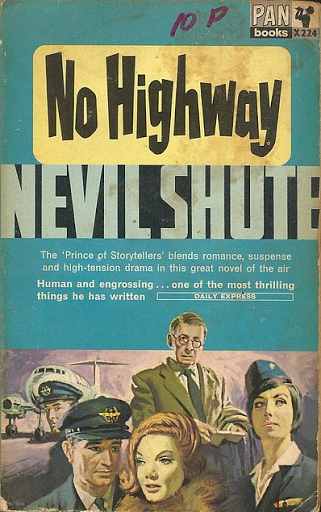 Therefore, go forth, companion: when you find

No Highway more, no track, all being blind,

The way to go shall glimmer in the mind.

Though you have conquered Earth and charted Sea

And planned the courses of all Stars that be,

Adventure on, more wonders are in Thee,

Adventure on, for from the littlest clue

Has come whatever worth man ever knew;

The acknowledgments say they are from The Wanderer. I've been looking for the original poem for years, Masefield did write a poem "The Wanderer", but they are not from that. Last night I tried again and found a presentation by Ken Croasdale to a Society of Naval Architects and Marine Engineers function, identifying the source as Masefield's book The Wanderer of Liverpool. In that book they form part of a longer poem "The Ending", which tells of the end of the ship The Wanderer.

"Adventure on, companions, the attempt

The raging sea is grim with reefs un conn’d :

There is a way, a haven is beyond.

Way for yourself, a harbourage for you,

Where every quarry spirit can pursue

Is, in the glory of the dream come true."

So singing, she wanders the waters with white wing on wing

Archive.org has The Wanderer of Liverpool, the poem "The Ending" is here, pages 76-87

Posted by A Rambling Ducky at 22:48 No comments:

Countless words have been written about him, and he has defeated all his biographers - I think perhaps Peter Rowland's 1975 effort is the best. He really needed - needs - a Martin Gilbert to take him on.

I want today to concentrate on just a couple of episodes in his long and eventful life.

He was perhaps the most outspoken British opponent of the Boer War, speaking out against both its origins and its conduct. When he learnt of the concentration camps into which the British Army corralled Boer women and children he said "If I were to despair for the future of this country it would not be because of trade competition from either America or Germany, or the ineffectiveness of its army, or anything that might happen to its ships; but rather because it used its great, hulking strength to torture the little child".

On 18th December 1901 Lloyd George went to Birmingham to speak against the War. Why Birmingham? It was the power-base of Joseph Chamberlain, Colonial Secretary,  responsible for starting the War and whose family firms, including Kynoch's, were not only major employers there but also made millions supplying both British and Boer with ammunition.

Some 50,000 (some estimates say up to 200,000) supporters of Chamberlain and the War turned out armed with knives, bricks, and hammers. Amidst cries of "Kill 'im! Kill the bloody traitor" the town hall was attacked and the platform rushed. Lloyd George tried to speak, but eventually had to retreat, disguised as a policeman. Every window in the town hall was smashed by the crowd, two people were killed, and Joseph Chamberlain "openly regretted Lloyd George's escape".

Lloyd George was burnt in effigy in his constituency, his primary source of income (MPs were unpaid) the law practice of Lloyd George & George lost clients, and his family were ostracised. His son Richard was bullied so badly that he had to change school.

Lloyd George shewed great courage - moral and physical - in his opposition to the Boer War. He did so not out of any anti-British or even anti-Imperial sentiment, but out of a belief that Britain should be better. As Marvin Rintala put it "Sympathize with the enemy Lloyd George certainly did, because he was human, and ashamed of British behavior in South Africa he certainly was. Anti British he was not. He merely expected more from the Britain he loved. The British flag was not, in his view, Joseph Chamberlain's pocket-handkerchief".

The other is his burial.

In 1944 Lloyd George moved back to his childhood village of Llanystumdwy, and he died there on this day 1945. His old friend, colleague, and rival Winston Churchill had offered him a state funeral and burial at Westminster Abbey, among the great and good of the nation, the resting place of Kings and of the Unknown Warrior of the Great War - a fit end for "the Man who Won the War".

Lloyd George refused. Many years before he had chosen the place he wanted for his grave. It was to be a boulder on the banks of Afon Dwyfor, a place he had sat and played as a child. He once told Lucy Masterman "If we had kept the law about trespassing when we were children we would have had nowhere to play but a dusty strip of grass by the highroad" and she was to say that "I never remember during all our visit passing a 'trespassers will be prosecuted' notice without him remarking “I hate that sort of thing”".

His choice of burial place, and his attitude to "Keep Out" and "No Trespassing" signs say something to me about the man. As a young boy I lived in a little village on the north coast of Cornwall. We never concerned ourselves too much with such signs, and I hope that children still ignore them.

Posted by A Rambling Ducky at 12:24 No comments:

As an avid reader of limited financial means I often find myself buying ex-library books from various websites. I understand that libraries have limited space and funds, and need to dispose of some books to free up the shelves and raise some money for new acquisitions.

But some of the books I've bought in this way make me stop and think about the way disposals are done.

My copy of Through Terror to Triumph, speeches by David Lloyd George in 1914 and 1915, has the bookplate of Manchester Central Library Reference Library - the Neville Laski Collection. 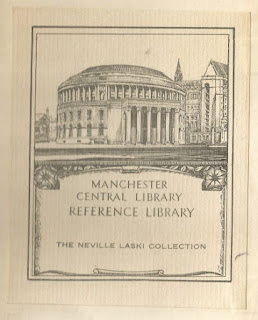 Neville Laski was a member of the Laski family of Manchester, chairman of the Manchester Victoria Memorial Jewish Hospital, secretary of the Manchester Jewish Community Council, and a host of other appointments including President of the Board of Deputies. His family were closely involved in Manchester's public life - his mother Sarah being a councillor and later alderman on Manchester City Council for many years, and a strong advocate for women, children, and the poor.

So the Neville Laski collection could represent a significant insight into the life and works of one of Manchester's notable sons. Alas, I can find no mention of it on the Manchester Libraries website, and indeed the only trace seems to be in booksellers' catalogues.

When a library disposes of a collection like this it breaks a link with the past - not only the library's past, but the past of the community. It erases a collective memory.

So what to do? At the least I would suggest keeping a catalogue of special collections, bequests, and the like. To know what was in the Neville Laski Collection - even if the books in it needed to be disposed of by Manchester - would enable anyone to recreate it in their own library - whether of physical books or electronic media. This is the sort of thing that volunteers cad do - and do well. For example, the book cataloguing website LibraryThing has "Legacy Libraries" - catalogues of famous readers, authors, politicians, etc.

Posted by A Rambling Ducky at 13:36 No comments:

The LibDem official Twitter account has been tweeting against allowing the "Eat Out to Help Out" scheme being used for McDonald's, KFC, and the like. Apparently having a cheap treat in the midst of one of the most miserable periods of post-war history will bring the NHS crashing down and cause everyone to suddenly become morbidly obese and die of Coronavirus, or something like that.
On the 4th of July Munira Wilson, LibDem spokesperson for Health and Social Care, tweeted about a lovely meal she'd had with her family, including those well-known heath foods, burgers, waffles, and icecream. The restaurant (which is now taking part in Eat Out to Help Out) charges over £14 for burger and chips (service not included). The wine list on their website doesn't give the prices, but I suspect the Veuve Cliquot Yellow Label is rather more than the £1.69 McDonald's charge for a milkshake.
Now I've nothing against Munira enjoying a good meal out with her family, and I'm genuinely happy for her that she can afford to spend so much money on a treat. I wish more people could. What I can never accept is a policy directly targeting poorer people, seeking to deny them choices that the well-off take for granted, and shaming them for "eating the wrong things".
Some of us remember the ideal of the "Free Breakfast Table" and, going further back, the campaign against the Corn Laws. We as a Party have a proud tradition of trying to make food more affordable for the people who struggle the most. Let's not abandon that for a joyless, puritanical, and frankly mean-spirited "we know better than you" policy.
Posted by A Rambling Ducky at 15:22 No comments:

Email ThisBlogThis!Share to TwitterShare to FacebookShare to Pinterest
Labels: Eat Out to Help Out, Food, LibDems, Liberalism

I was very pleased today to receive The People's Insurance by David Lloyd George. Originally published in 1912 it explains the scheme of National Insurance and National Health Insurance introduced by the Liberal Government in 1911. As well as speeches by Lloyd George both in the House and in the country, it includes extracts from explanatory memoranda issued by the government, as well as the text of the Act. 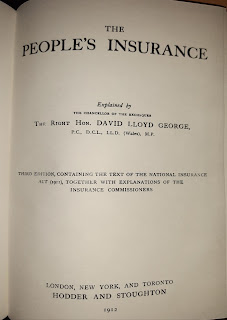 My copy is a modern print-on-demand facsimile produced by Gyan Books in India. Usually I prefer to buy originals, but this work is vanishingly rare. It's a handsomely produced volume, leather-bound, and clearly printed. The binding is sewn, and it lies flat. It makes an attractive addition to my shelves. I must say I am impressed, and shall be seriously considering further books from them - both for works I cannot find (or afford) originals of, and for reading copies of some of my more fragile books. 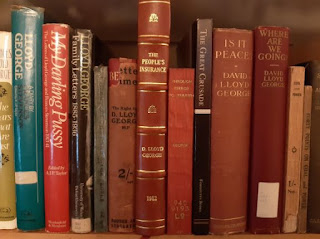 Posted by A Rambling Ducky at 13:30 No comments:

A selection from my library